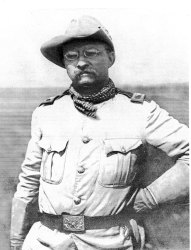 Theodore T. Roosevelt, United States Army, who distinguished himself by acts of bravery on 1 July, 1898, near Santiago de Cuba, Republic of Cuba, while leading a daring charge up San Juan Hill. Lieutenant Colonel Roosevelt, in total disregard for his personal safety and accompanied by only four or five men, led a desperate and gallant charge up San Juan Hill, encouraging his troops to continue the assault through withering enemy fire over open countryside. Facing the enemy’s heavy fire, he displayed extraordinary bravery throughout the charge. He was the first to reach the enemy trenches, where he quickly killed one of the enemy with his pistol, allowing his men to continue the assault. His leadership and valor turned the tide in the Battle for San Juan Hill. Lieutenant Colonel Roosevelt’s extraordinary heroism and devotion to duty are in keeping with the highest traditions of military service and reflect great credit upon himself, his unit, and the United States Army.