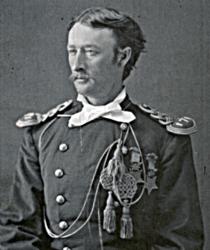 Captain THOMAS WARD CUSTER recieved his second Medal of Honor for action at Sailor Creek, Virginia, in April, 1865. The citation read: Second Lieutenant Custer leaped his horse over the enemy’s works and captured two stands of colors, having his horse shot from under him, and receiving a severe wound.

Captain Thomas Custer was killed in action on 25 June 1876, at Little Bighorn, Montana. He was serving with the 7th Cavalry (commanded by his brother, Brevet Major General George Armstrong Custer). They were engaging the combined forces of Cheyenne and Sioux Indians, commanded by Crazy Horse and Sitting Bull. Captain Custer was buried, with his brother and other family members at Little Bighorn three days later (28 June 1876), near the spot where he fell. The next month he was reinterred at Fort Leavenworth, Kansas.

Captain Custer was posthumously enrolled in the Legion of Valor in 2005 by a Fallon, Nevada member of the L.O.V. View Captain Custers’ First Medal Of Honor.