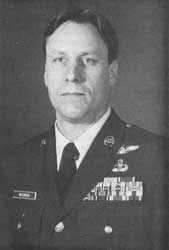 TIMOTHY A. WILKINSON, Technical Sergeant, United States Air Force. For extraordinary heroism in military operations against an opposing armed force as a 24th Special Tactics Squadron Pararescueman in the vicinity of the Olympic Hotel, Mogadishu, Somalia, from 3 October 1993 to 4 October 1993. During that period, in response to an incident in which a United States helicopter had been shot down by a rocket propelled grenade, Sergeant Wilkinson conducted a fast rope insertion into the crash site and came under extremely heavy enemy fire from three directions. In the initial rescue effort, he repeatedly exposed himself to intense small arms fire and grenades to clear debris, provide emergency medical treatment to the survivors, and extract dead and wounded members of the crew from the wreckage. On his own initiative, Sergeant Wilkinson broke cover on three separate occasions to locate and provide emergency medical treatment to three Ranger casualties. In doing so, he ignored all concern for his personal safety to cross a 45 meter-wide open area blanketed with intense fire from small arms, and rocket propelled grenades. Sergeant WilkinsonÃ­s medical skills and uncommon valor saved the lives of multiple gravely wounded American soldiers in the longest sustained fire fight involving United States combat forces in over 20 years. Through his extraordinary heroism, superb airmanship, and aggressiveness in the face of the enemy, Sergeant Wilkinson reflected the highest credit upon himself and the United States Air Force.

Mr. Wilkinson is a life member and resides in Florida.