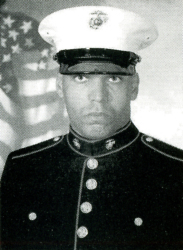 Todd J. Corbin, United States Marine Corps: For extraordinary heroism as Medium Tactical Vehicle Replacement Driver, Weapons Company, 3d Battalion, 25th Marines, Regimental Combat Team 2, 2d Marine Division, II Marine Expeditionary Force (Forward) in support of Operation IRAQI FREEDOM 04-06 in Hadithah, Iraq on 7 May 2005. Lance Corporal Corbin was the driver for a medium tactical vehicle when enemy forces ambushed his platoon, using a suicide vehicle borne improvised explosive device, rocket-propelled grenades, and machineguns. Instantly, three of the four vehicles were severely damaged and eleven of sixteen Marines suffered casualties. Lance Corporal Corbin immediately repositioned his truck directly between the enemy and many of the wounded. He radioed the situation to the battalion and leapt into the enemy fire, directing Marines to engage and marking targets. He ran to his fallen patrol leader, threw him onto his shoulder and carried him to safety while firing at the enemy with his off-hand. Lance Corporal Corbin re-crossed the kill zone, made his way to his fallen corpsman, bound his wounds and began carrying him. As he began to move, the enemy engaged at close range and Lance Corporal Corbin threw himself on a wounded Marine, shielding him as friendly machinegun fire suppressed the enemy. Organizing Marines to suppress and repel the ambush, he then, on five occasions, ran through enemy fire, recovered dead or wounded personnel, and returning them to his truck. When the casualties were loaded on to his heavily damaged vehicle, he activated its emergency systems and drove it out of the kill zone, through the city to a battalion aid station five miles away. Because of his heroism, no Marine lost his life after the initial attack. By his outstanding display of decisive leadership, courage in the face of heavy enemy fire, and utmost devotion to duty, Lance Corporal Corbin reflected great credit upon himself and upheld the highest traditions of the Marine Corps and the United States Naval Service.