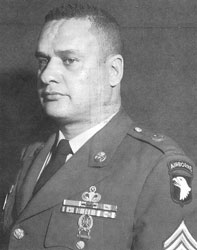 SERGEANT FIRST CLASS WEBSTER ANDERSON received the Medal of Honor for his conspicuous gallantry and intrepidity in action while serving as Chief of Section in Battery A, 2nd Battalion, 320th Artillery, 101st Airborne Infantry Division (Airmobile) against a hostile force near Tam Ky, Republic of Vietnam. During the early morning hours on 15 October 1967, Battery A’s defensive position was attacked by a determined North Vietnamese Army Infantry unit supported by heavy mortar, recoilles rifle, rocket propelled grendade and automatic weapons fire. The initial enemy onslaught breached the battery defensive perimeter. Sergeant Anderson with complete disregard for his personal safety mounted the exposed parapet of his howitzer position and became the mainstay of the defense of the battery position. Sergeant Anderson directed devastating direct howitzer fire on the assaulting enemy while providing rifle and grenade defensive fire against enemy soldiers attempting to overrun his gun section position. While protecting his crew and directing their fire against the enemy from his exposed position, two enemy grenades exploded at his feet knocking him down and severly wounding him in the legs. Despite the excruciating pain and not being able to stand, Sergeant Anderson valorously propped himself on the parapet and continued to direct the howitzer fire upon the closing enemy and to encourage his men to fight on. Seeing an enemy grenade land within the gun pit near a wounded member of his gun crew, Sergeant Anderson, heedless of his own safety seized the grenade and attempted to throw it over the parapet to save his men. As the grenade was thrown from the position it exploded and Sergeant Anderson was again grievously wounded. Although only partially conscious and severely wounded, Sergeant Anderson refused medical evacuation and continued to encourage his men in the defense of the position. Sergeant Anderson by his inspirational leadership, professionalism, devotion to duty and complete disregard for his own welfare was able to maintain the defense of his section position and defeat a determined enemy attack. Sergeant Anderson’s conspicuous gallantry and extraordinary heroism at the risk of his own life above and beyond the call of duty are in the highest traditions of the military service and reflect great credit upon himself, his unit and the United States Army.

SFC Anderson joined the Legion of Valor in 1970 and resides in South Carolina.