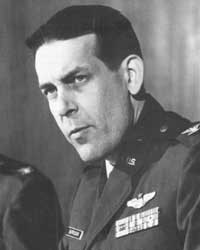 MAJOR WILLIAM D. BORROUGHS distinguished himself by extraordinary heroism in connection with military operations against an opposing armed force in Southeast Asia on 11 July 1966. On that date, Major Burroughs flew his unarmed and unescorted RF-101 Voodoo against a strategic target of vital importance situated along a critical northeast railroad only thirty-five nautical miles northeast of Hanoi. This target was of singular value, and the immediate area defenses were as concentrated, menacing, and vicious as any in the annals of air warfare. Refusing to be deterred by a direct hit from a deadly missile which caused major structural damage to his aircraft, Major Burroughs courageously pursued his mission and obtained important photo intelligence of this strategic target. By his extraordinary heroism, superb airmanship, and aggressiveness in the face of an armed hostile force, Major Burroughs reflected the highest credit upon himself and the United States Air Force.

Col. Burroughs was a life member and resided in Arizona. He was L.O.V. National Commander 1998-1999.