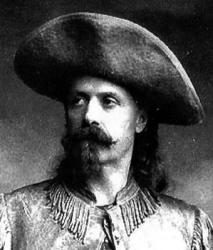 WILLIAM FREDERICK CODY received the Medal of Honor for “Gallantry in Action” during the Indian War on April 26, 1872 while serving as a civilian scout for the 3rd Cavalry, U.S. Army at Platte River, Nebraska.

In 1917, an army review board rescinded the award since Cody was not officially enlisted in the military service. An additional 910 recipients were also purged from the Medal of Honor rolls by this review board. Cody’s Medal of Honor was reinstated in 1989 by Congress.

William F. Cody was born in 1846 at Le Claire, Iowa and died in Denver, Colorado. he was buried on June 3, 1917 at Lookout Mountain, Golden, Colorado. His initial service to the military took place during the Civil War when he served as a scout for the Union 7th Kansas Cavalry. In 1868, he became chief of scouts for the 5th Cavalry and took part in 16 battles including Cheyenne’s defeat at Summit Springs, CO. in 1869. He later became famous as “Buffalo Bill” in his Wild West Show that toured the United States and Europe for many years.