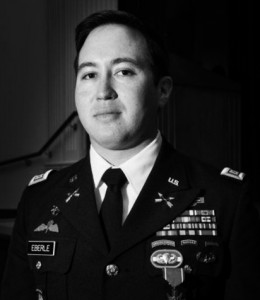 William N. Eberle, United States Army: Heroically distinguished himself
by exceptionally valorous conduct in the face of the enemy of the United States as the Special Forces Detachment Commander, Special Forces Operational Detachment-Alpha 3132, Special Operations Task Force-East, Bagram Airfield, Afghanistan, Combined Joint Special Operations Task Force-Afghanistan in support of Operation ENDURING FREEDOM XIX. On 2 December 2012, Captain Eberle, and his detachment, were called upon to serve as a quick reaction force responding to an attack on Jalalabar Airfield, Nangahar Province. Enemy insurgents had breached the exterior and interior gates of the base with two vehicle-borne improvised explosive devices, injuring dozens of individuals and creating chaos. Captain Eberle, serving as the Detachment Commander, and other members of the detachment responded to the attack in two vehicles. Upon arriving at the breach, the detachment noticed American and Afghan forces pinned against a wall with several seriously wounded. Captain Eberle directed his vehicle to the breach to shield the wounded and provided effective suppression on the enemy. Captain Eberle dismounted his vehicle while under direct fire to gain better situational awareness of the disposition of the enemy forces and better contrrol and direct the fires of his element. Captain Eberle’s command and control within the initial moments allowed the injured U.S. and Afghan personnel the ability to be evacuated from where they were pinned down adjacent to the breached gate. Captain Eberle maneuvered to and up the tower adjacent to the gate to gain a better vantage point and engage the enemy attackers from an elevated position. Captain Eberle engaged the enemy with his M-4 carbine and grenades from distances as close as a meter away from the tower he was in. Throughout this exchange, Captain Eberle was consistently exposed to enemy fire, but he continued to engage the enemy from his position in the tower, which received enemy hand grenades, rocket propelled grenade,
and small arms fire. The enemy hand grenades were air bursting on the netting of the wall and landing on the ledge of the tower and exploding within a meter of Captain Eberle. After Captain Eberle had exhausted his supply of hand grenades, he moved out of the tower and back to the vehicle to coordinate with other government agency advisors. As the other government agency advisors and their Afghan counterparts retook the tower and began to coordinate to move outside the breach, Captain Eberle and the detachment’s Joint Tactical Air Controller coordinated air assets in support of the ground force moving outside the compound to complete the clear and sweep of the area. Captain Eberle’s actions throughout the fight helped save the lives of multiple coalition and Afghan personnel and prevented Jalalabad Airfield from being overrun by insurgent forces. His actions are in keeping with the finest traditions of military heroism and reflect distinct credit upon himself, the combined Joint Special Operations Task Force-Afghanistan, Special Operations Joint Task Force-Afghanistan and
the United States Army.
Eberle currently lives in Virginia Beach, VA.