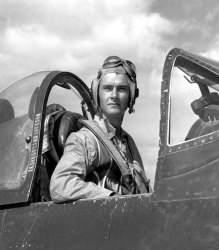 The President of the United States of America takes pride in presenting a Gold Star in lieu of a Second Award of the Navy Cross (Posthumously) to Captain William Perry Brown, Jr. for extraordinary heroism in connection with military operations against an armed enemy of the United Nations while serving as Pilot of a Plane temporarily attached to Marine Fighting squadron THREE HUNDRED TWENTY-THREE (VMF-323), in action against enemy aggressor forces in the Republic of Korea on 24 February 1952. Volunteering to participate in an eight- plane strike against heavily defended rail and bridge installations along a main enemy supply route at Sariwon, Captain Brown fearlessly pressed home his attack in the face of an intense barrage of hostile anti-aircraft fire and scored a direct hit on a rail line with a 1,000 pound bomb. Spotting a convoy of enemy trucks entering a well-fortified supply center while he was recovering from his initial dive, he immediately launched a low-level strafing run on the objective despite damage to his plane from continuous hostile ground fire. Although his aircraft burst into flames, Captain Brown bravely continued to dive on the vehicles with his guns blazing until his plane crashed and exploded amid the convoy. His outstanding courage, superb airmanship and valiant devotion to duty in the face of overwhelming odds reflect the highest credit upon Captain Brown and the United States Naval Service. He gallantly gave his life for his country.

Brown’s membership was sponsored by his daughter, Cheryl Young.