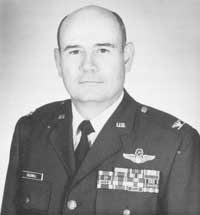 COLONEL WILLIAM R. CALDWELL, then Captain, United States Air Force. For extraordinary heroism in military operations against an opposing armed force as a C-130E Instructor Pilot for the 776th Tactical Airlift Squadron at An Loc, Republic of Vietnam, on 15 April 1972. On that date, Captain Caldwell flew a tactical emergency airdrop of critically needed ammunition to a besieged concentration of allied forces located in a heavily defended area. Enroute to the target, his aircraft was severely damaged by hostile anti-aircraft fire, fatally injuring the Flight Engineer and wounding other crew members. Realizing bailout of the injured crew members would be extremely difficult, Captain Caldwell, without regard for his personal safety, remained at his station and flew the aircraft to a successful two-engine landing, thereby saving the lives of his crew. Through his extraordinary heroism, superb airmanship, and aggressiveness in the face of the enemy, Captain Caldwell reflected the highest credit upon himself and the United States Air Force.

COL Caldwell is a life member and resides in Illinois.