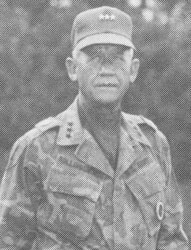 JAMES F. HOLLINGSWORTH, then Brigadier General, United States Army Headquarters, 1st Infantry Division. For extraordinary heroism in connection with military operations involving conflict with an armed hostile force in the Republic of Vietnam. Brigadier General Hollingsworth distinguished himself by exceptionally valorous actions on 20 March 1967 while serving as Acting Commander, 1st Infantry Division when the artillery support base at Bau Bang came under intense enemy mortar attack a few hours after midnight. Taking off in his command helicopter, following a briefing on the situation, General Hollingsworth immediately flew to the besieged unit. Despite the devastating ground fire directed at his aircraft, he ordered his pilot to make repeated low level passes over the ravaged area while he dauntlessly reconnoitered it. Realizing that an insurgent ground assault was imminent, General Hollingsworth called for air strikes as he continued to expose himself to the hail of bullets streaking through the darkness. When flareships illuminated the battlefield, he located the Viet Cong assembly area and, ignoring his vulnerable position, guided the support aircraft in their bombing and strafing runs. At 0500 hours, the insurgents began their mass attack. Contemptuous of the grave dangers, General Hollingsworth flew directly over the assaulting force and adjusted artillery fire into the charging Viet Cong. During the entire engagement, he continuously risked his own safety to best coordinate and direct the aggressive defense, which finally repulsed the fanatical enemy. Through his boundless courage and tactical ingenuity, he was instrumental in the defeat of the Viet Cong regiment, in which over 250 insurgents were killed. Brigadier General Hollingsworth’s extraordinary heroism and devotion to duty were in keeping with the highest traditions of the military service and reflect great credit upon himself, his unit, and the United States Army.