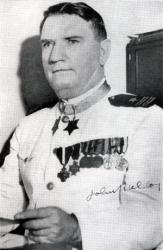 Lieutenant Commander McCloy’s first Medal of Honor was awarded when he was serving as Coxswain, U.S.Navy, and was for distinguished conduct in the presence of the enemy in battle in the 13th, 20th, 21st, and 22nd of June 1900, while with the relief expedition of the Allied Forces in China. He was wounded while taking Siku Arsenal, June 22, 1900.

Commander McCloy was the Legion of Valor National Commander in 1922-1923.